The arrival of John Hamilton as the new manager in 1893, was to bring very significant changes to the way the whole of the Butterley Company operation in the Crich and Wirksworth areas was conducted, and heralded a period of expansion and modernisation. One of the first changes was that men were now employed directly by the Butterley Company, instead of being casually employed – it is deduced that the core of the losses described in the previous section centred on the payment of the labour force, and the opportunity for extensive falsification and fraud to take place. Contracting had probably taken place since the limeworks began because there was a reference to “bargainmen” as early as 1797.

A new 0-4-0 wing-tank locomotive was purchased in 1894 from Bagnalls of Stafford, and named “Fitz” after the managing director of the time, Fitzherbert Wright. It replaced the “Coffeepot”, and its additional power made it possible to take trains of wagons all the way up the slope into Hilt’s Quarry. The incline and a further 400 yards (366m) of siding were re-laid using heavier rail. Trains typically comprising some sixteen 3-ton wagons were now run three or four times a day – equivalent to the stated output of some 150 tons (152 tonne) per day.

Hamilton now proposed raising the height of the kilns at Amber Wharf by 25ft (7.6m) in conjunction with building a new kiln with engine, crusher, screens, hoppers and elevators. The directors agreed to a simpler version of the scheme but still requiring extensive work to be carried out to improve the capacity of the kilns, and the access to them, and to improve the access from the gangroad and kilns to the main line railway. The kilns were raised by just 15ft (4.6m) and the railways below the crusher were to be lowered by 11ft (3.6m) to allow larger hoppers.

By the early 1900s there were seven kilns at Bullbridge – three small old ones, three large rebuilt elliptical kilns, and one new round kiln. There were now elevators to handle both coal and stone, and a new stone crusher and tippler were also in use. To serve this operation, two locomotives (and possibly the third, small “coffeepot” loco purchased in 1869) and 52 wagons were in service. The maximum output averaged around 200 tons (203 tonne) per day.

The photograph opposite shows the lime works and workmen in 1905. In 1908 wages had to be increased because men were leaving to work for the Derwent Valley Water Board. This was a massive project that involved constructing a buried “aqueduct” from the Derwent Valley dams to East Midlands cities. 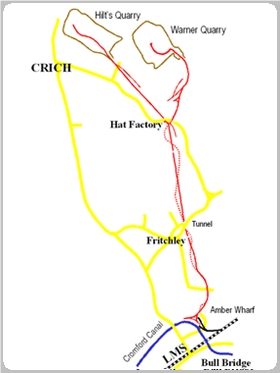 The layout at Amber Wharf now consisted of a double track approach so that inward traffic could be held on one line and empties on the other .

The photograph on the right shows the Cromford Canal and the Bullbridge lime works showing the conveyor system installed in 1903. Further improvements were made to the machinery at Amber Wharf in 1913 and 1914.

Details of the expansion of the quarries. 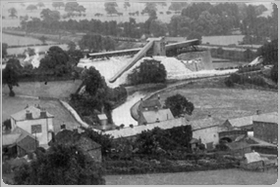