The outbreak of war in 1914 led to the volunteering and conscription of some of the men working at the quarries and limeworks. Replacements were needed to maintain the workforce, and these were  drawn from German and Italian prisoners of war.

The production of limestone became fairly erratic during the war and afterwards, as shown in the accompanying graph. The output from the newly restored Warner Quarry failed to live up to expectations and Hilt’s quarry continued to be difficult to work. Demand was variable – this even led to the temporary closure of the kilns for a year in 1922 and terminating the use of Dale Quarry.

The old vertical-boiler locomotive (the “Coffeepot”) was disposed of during the war, for scrap. A new boiler was installed in the “Salisbury” locomotive in 1927, and this locomotive worked most trains from now onwards.

The reopening of Warner Quarry was not successful, and Hilt’s quarry was worked right up to the adjoining houses. This led to the cessation of quarrying operations, and then to the closure of the limeworks business in 1933.

The narrow gauge track was sold for scrap, and the wagons were cut up for scrap at the Hat Factory (see opposite). The two remaining narrow-gauge locomotives did not find a buyer, and were themselves cut up in 1938. Much of the standard gauge track at Bullbridge remained in situ until the second world war, when it too was scrapped.

The tunnel at Fritchley was used as an air-raid shelter, and after the war, was filled in at both ends and effectively sealed until temporarily reopened as part of this project in 2013.

From 1950, Hilt’s Quarry was used as a municipal rubbish tip. In 1961 the Butterley Company sold the whole site – quarries, wharf and infrastructure at Bullbridge, and the gangroad route itself, to a development company. The Amber Wharf site was re-developed in 1965. However many of the old buildings and industrial archaeology survive amongst housing built since the sale (see opposite lime kilns before re-development).

Derbyshire County Council obtained the Warner Quarry and the old route from Dimple Lane for use as a landfill site in 1983.

Apart from this most of the rest of the railway has survived remarkably well, including some remains of the original 1793 alignment.

The Butterley Company itself went into liquidation in 2009. 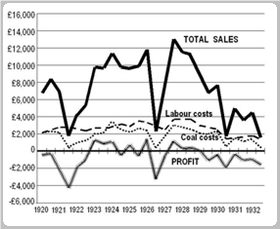 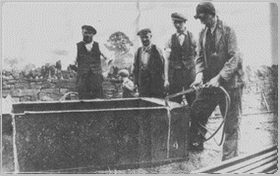 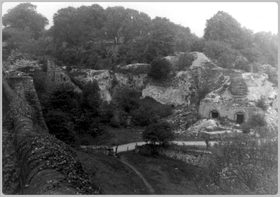 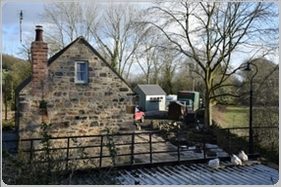