The Butterley Gangroad Walk leaflet has been produced by the project to enable interested parties to trace the route of this early railway and view some of features that survive today.

The walk starts at Crich Market Place ( DE4 5DD, OS GRID ref. SK 349 542) where there is an interpretation board giving details of the walk and the history of the railway.This is located on the  outside west end of the bus shelter.

The early part of the walk traces the Hilts extension line down to the route of the original line just prior to the Dimple Lane crossing.The sites of the Warner and Hilts quarry are not accessible as they have been used as landfill sites. The Hat Factory area, including the engine shed have to be viewed from Dimple Lane as the area is now all private properties.

The Butterley Company bought the two main Hat Factory buildings in 1810 for worker’s housing but only one remains. The one sited south of Dimple Lane, adjacent to the engine shed, was demolished in the 1930s.

From the Hat Factory the route runs down the west side of the valley towards Fritchley Village. Here it passes under a road junction by means of a short tunnel about 90 feet (28m) long, 8ft 6in (2.5m) wide and 10ft (3m) high. The tunnel was constructed by the “cut and cover” method. The north and south portals of the Fritchley tunnel were sealed up many years ago and excavation work was required at the north portal to enable a full study to be undertaken. Following completion of that work the north portal has been resealed and the tunnel interior is again no longer accessible. The second interpretation board is located at Fritchley, on the green known as the Drying Ground. The display adjacent to the board demonstrates how the later flanged wheel wagons were able to run on both conventional railway track and the original plateway. This is also a vantage point from which the well preserved stretch of stone embankment of the new straight alignment can be seen. This embankment was walled on both sides to protect the horses and the wall of the east side was later repaired using about 70 stone sleeper blocks.

From Fritchley the route heads south and can be seen from Bowmer Lane as a line of trees on the edge of the field on the east side of the lane. This is a well preserved section with stone walls either side and another substantial stone embankment.The original 1793 route crosses Dimple Lane before turning south west heading for the Amber Wharf at Bullbridge. 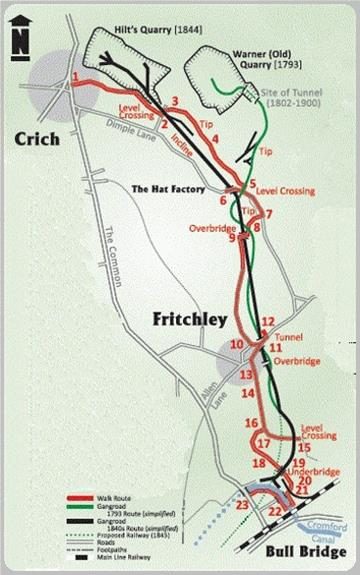 The Amber Wharf site at Bullbridge has been re-developed since the line was closed and very little of the original infrastructure survives today. The section of  the Cromford Canal

at Bullbridge has been filled in and parts have been built on. However the works manager’s house, Lime Grange, is in tact and is a private residential property, two derelict lime kilns are just visible from Drovers Way and the old bridge over  Drovers Way, where the line entered the Amber Wharf yard, survives with the wooden strengthening beams still in place. The bridge is on skew across the road and was raised and re-aligned during it’s lifetime.

Beyond the bridge on Drovers Way the third interpretation board is located in front of the remains of two of the later larger kilns. The interpretation board explains the layout of the and history of the Amber Wharf area all of which is now private land. From this point the walk continues and reaches the level of the old Cromford Canal. The path follows the towpath and eventually comes to a stretch of the canal that still has water.

The walk ends at the bridge over the canal at Bullbridge from where it is possible to return either on foot or to take  a bus (except Sundays).

Selected points of interest shown on the adjacent map.

12 Interpretation board at Fritchley

18  Stride n’arf and section of rail